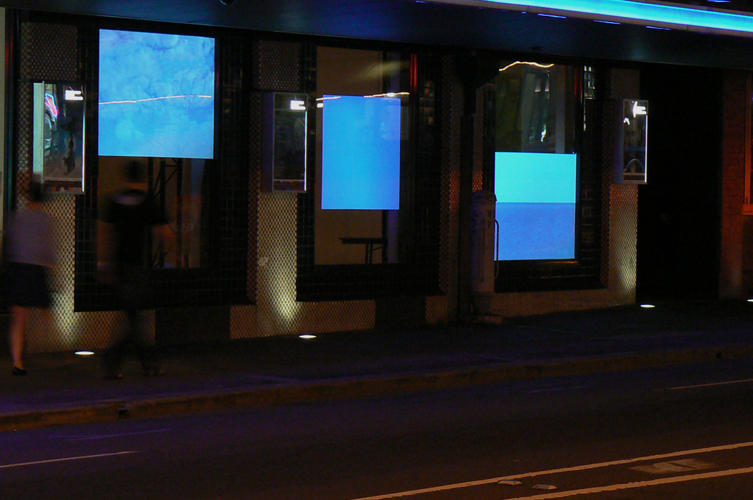 Brisbane based artist Paul Bai produced a site specific three-channel video projection, The Sky is the Limit, for the Shop Front windows of the Judith Wright Centre of Contemporary Arts, between the 1st and 9th of September, 2008.

On this occasion, Bai explored the notion of ‘space’ in the format of video projection.

The looped projections presented three different views of the sky, filmed in a static position: slowly moving clouds, a clear blue sky, and a horizon with the sky meeting the sea centre-frame. The expansive, immeasurable and non-delineated space captured by Bai was further emphasised by the video’s generous temporal space.

The relationship between the projected space and the actual physical space, where the installation was situated, was crucial in this work.

The bare installation space was plainly visible through the window surrounding the projection, in contrast to the opaque projection surface. A third dimension was added by incidental reflections, caused by night time traffic and surrounding street lights; a dynamic which contrasted heavily with the subtle motions of the projected images.

The positioning of the projection screens was precisely executed, and without being contrived, recreated the camera’s aspect. The far right image creates a clear central focus, with the horizon line at eye level; here, Bai has crafted the meeting of two lenses at the surface of the glass.

As a cliché, ‘the Sky is the Limit’ presents a parochial and contradictory conception of space. Bai consciously manipulates the tension implied between infinite expansion (the sky) and confinement (perceptual limits) both physically and conceptually in the work. The sky captured in each projection is tightly framed, which limits our view of the space whilst suggesting its infinite continuation beyond the camera lens.

The light emitted from the projector is contained only by the thin paper surface it hits, preventing the image from extending through the glass. The projection space, however, is dislocated by the slight misalignment of the projection, where it escapes the screen and bleeds onto the outside pavement. With this subtle gesture, Bai subverts our perception of the installation’s physical space, described by the severe, and seemingly impenetrable built structure.

The placements of the three projections are also important to this work, the non-projected space compensates the limitation of the content of the projection. Under the sky, above the sea, or a piece of blue space floats within a greater space.

This work connects the content of projection with its immediate environment.

We should not forget that the projection can be viewed from both sides.’