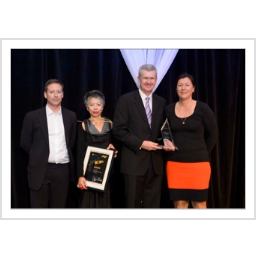 The inaugural awards, presented in Sydney on Thursday August 1, “celebrate the achievements of Australian arts celebrate the important role Australian artists and arts organisations play in enhancing our relationship with Asian countries” said The Minister of Arts, Tony Burke.

MAAP was nominated in five categories for its major China-Australia touring exhibition ‘Light from Light’. MAAP picked up the largest total of nominations for a single project at this year’s award ceremony. MAAP was the only award winner from Queensland.

Light from Light was an international touring exhibition of contemporary art from Australia and China. This project spanned from 2010-2012, visiting five major libraries and art museums in Shanghai, Beijing, Hangzhou and Brisbane. The exhibition featured artworks themed around the idea and properties of light, as interpreted by world-renowned Australian, Chinese and international artists. A collection of light-inspired and light-generating artworks was displayed throughout library collection spaces, reading rooms and public areas of the library venues, including the National Library of China, Shanghai Library, Hangzhou Public Library and State Library of Queensland. A solar-powered geodesic dome, commissioned from respected Melbourne artists Janet Burchill and Jennifer McCamley, was installed as a temporary public artwork at each library site, and visited the popular National Art Museum of China. The Light from Light artists were (from Australia) Archie Moore, Eugene Carchesio, Grant Stevens, David Haines, Joyce Hinterding, Janet Burchill, Jennifer McCamley, (from Europe) Josef Strau, (from China) Zhang Peili, Wang Peng, Pak Sheung Chuen, Lin Tianmiao and Wang Gongxin.

The Australian Arts in Asia Awards acknowledge the work of Australian artists and arts organisations making important cultural links in Asia. There are 69 finalists nominated across 14 categories.

MAAP was nominated as a Finalist in the following categories:

MAAP ‘Light from Light’ was nominated in the most Finalist Award categories of any project in the awards. A great achievement and we are very excited to see this recognition.  This is great news to share with our readers and colleagues that have been so supportive and generous with their time, advice and encouragement!